Spy x Family, a manga written and illustrated by Tatsuya Endo, which began serialization in march 25 of 2019, with more than 60 chapters currently, is still releasing chapters. Has released an official trailer for part 2 of the first season more than a week ago. The trailer was released on September 15 of 2022, just two weeks before the premiere of the second half of the season. The first half of the first season, which ran from April 9 to June 25, got a total of 12 episodes.

Episode 12, the ending of the first half, was weirdly placed in the season. The reason why is because the episode adapted the Extra mission 1, which is chapter 8.5 (being the aquarium visit) and the Extra chapter 1, which is chapter 15.5 (Being Anya playing with her stuffed toys and getting into trouble) of the manga. Those side stories, while entertaining. Don’t continue with the story presented in episode 11, this one adapted chapter 16 and 17 of the manga. So episode 13, will continue from where episode 11 left.

Where did episode 11 leave us? With Anya getting her first stella and her wanting a dog. One step closer to accomplish the mission and a new future family member. We got a short look of who might be joining the family soon.

The first shot of the trailer is the leader of the terrorist.

So the trailer starts with the main antagonist of this arc, the leader of the terrorist group, explaining part of his plan will be. From episode 11, we know the involvement of bomb dogs, but the trailer give us a more clearer idea to what are gonna be using them. As a device to incite war between Westalis and Ostania. 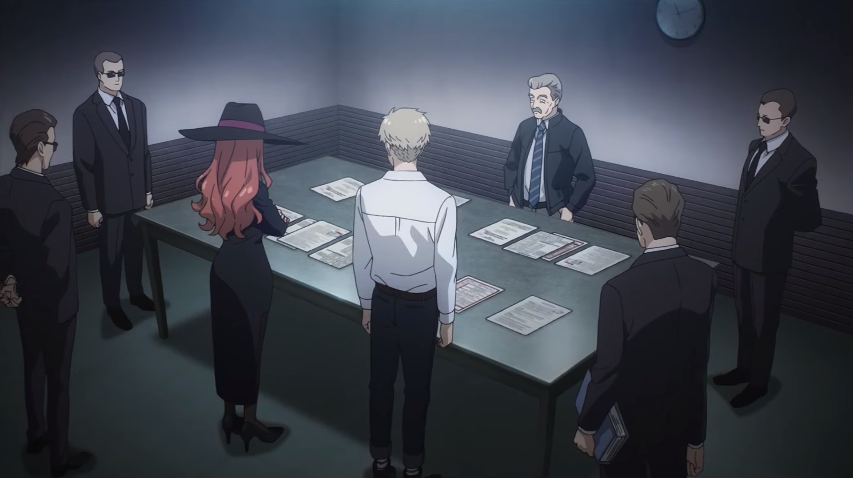 Twilight and the Handler in a reunion.

And falls into WISE or Westalian Intelligence, to avoid the mentioned attack, so the Handler calls for Twilight to take care of the matter, but by the look that we get in the trailer, Twilight is gonna be using a team, which makes sense, this isn’t a one-man type of mission and the scale and danger seems to be huge to leave to one guy, even if that guy is Twilight.

One of the most interesting parts of the trailer, was another glimpse, just like the one we see at episode 11, although this one has a terrible omen for the future of the mission: Twilight dying and not being able to stop the terrorist attack. The source of this glimpse, which is confirmed to be into the future, was none other than the dog, who has this ability. Which is discovered by Anya, as seen in the trailer.

Twilight looking fresh with his gun.

“Can we change the future if we try really hard?” Said Anya while a clock was ticking. An ominous reference to the information that she possesses. And what is about to happen to her father figure. This leads to more scenes in the trailer, showing Anya’s and Yor involvement in some way in the mission.

The trailer does show us what we are gonna be seeing, at least in the first episodes, in this second half, Twilight dealing with terrorist and their plan of using bomb dogs. Anya spending time with one of the dogs and Yor kicking people really hard. Accompanied with the excellent new opening song “Souvenir” by Bump of Chicken. A great choice. Ending with the date for the premiere of the second half of the season. October 1.With 13 episodes. The second part is going to run from October to December.

And although i love it. I wasn’t a big fan of how much this trailer presented.. As a manga reader, I know what is about to come. I feel like the trailer showed a bit too much, things I would have preferred to not be revealed to anime-only fans, until the second half started.

Next Article We Interviewed Icalis – All Ages of Geek

We Interviewed @birbinaus – All Ages of Geek

We intererviewed @birbinaus about their work! 1. What inspires your work? The world of animation has always been my primary source of inspiration. Back when […]

YUREI DECO Short Synopsis: An excitable teenage girl shirks her responsibilities to chase a camouflaged hacker around a digitally-augmented city. Wooper: I had some hopes […]

NFTs are still a very new phenomenon but are becoming increasingly popular with art collectors, including those that would have previously sought to collect traditional […]

Hello, and welcome to an unscheduled, random post from Amun!  As we reach the halfway point of one of the most hyped seasons in recent […]