Now and Then, Here and There – 4 [Discord] – Throwback Thursday


Welcome back everyone to another episode of Now and Then, Here and There!! This is normally where I say something snappy like, “You won’t believe how dark this week got”. Or maybe “This is the darkest week yet!”. But I’m pretty sure you all know this show better than I do, and that we can also get so much darker. So instead this week I’ll just say… Oh god. Now lets jump into it.

Once again I feel the need to point out just how bad the lightning in Now and Then is. I don’t do this to rag on the show, I’m… Ok enjoying might be the wrong word but let’s go with it for now, I’m enjoying my time with it. But some shots are just so incredibly hard to see through, or just look like ass. Take the opening shot of the episode in Abelia’s room for instance. What is this diffused filter? Is it supposed to tell me its early morning or something? Everything just looks foggy. Meanwhile the nighttime hallways, like the lynching, are once again impossible to see in. Outside of the, admittedly gorgeous, wide background shots there simply isn’t any complexity or care put into how it shows on screen. And I think that’s a damn shame. Enough about lighting for the nth time though, onto story! 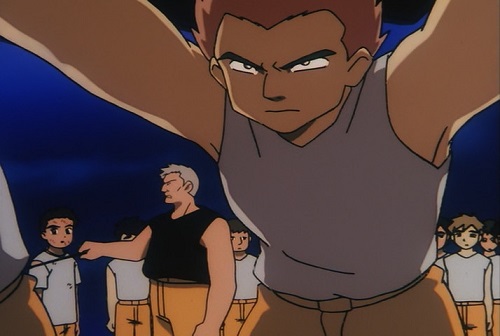 Getting into the episode proper, I would say that a lot of things happened this week. We learned a lot about what is going on in the tower through Shu and his experience of being drafted. At first I thought this was weird, and kinda weak writing. Why would they ever trust this kid in their army after kidnapping, torturing and beating the shit out of him? They can’t! But Now and Then uses that fact as a vehicle for the rest of our child cast. We learn that Shu is not alone, in fact everyone has been kidnapped and forced into the army, at least among the kids who know about the adults.

This is great for a lot of reasons, one of which being that drafting Shu isn’t stupid anymore. But one of my favorites is what this once again does to Tabool and Nabucco. For Tabool, we now have even the sea proof that he’s a victim here. That everything he does, from beating Shu up to trying to find the necklace and one up Nabucco, it’s all being done for the sake of survival. He’s doing his best to get by and is behaving exactly like this place and it’s “teachers” have taught him to. Cap this off with what we learn about Nabucco, how he was forced to kill the other kids from his village for running, and Tabool’s attitude starts to make a lot more sense. I wasn’t expecting him to become such a sympathetic character. But it’s clear now that he’s only like this because of Hamdo. 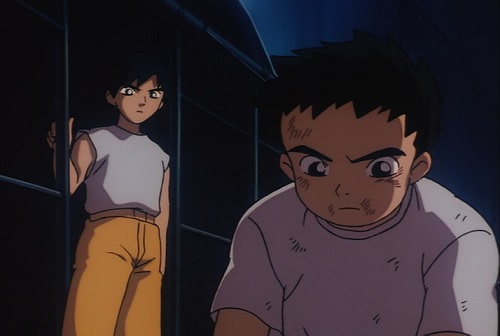 Speaking of Nabucco, we also learn a great deal about discipline within a corp and of his responsibilities. For the first, it’s pretty straight forward. They harshly punish any offenders and teach self-enforcement of the rules by giving the punishment to entire corps when any individual steps out of line. It’s a pretty tried and true way to make people distrust and watch each other. The much more interesting bit though is Nabucco’s responsibilities. While he has experienced everything Tabool has, he hasn’t broken in quite the same way. Where Tabool wants to survive through any means necessary, Nabucco is still clinging on to a clearly false hope and is trying to keep everyone else in the squad safe and alive until the end. It’s a lot of pressure for a 13 year old, and it explains why he seems to like Shu, but won’t let him risk the corp.

Bringing all of this together, the strong discipline, the kidnapping, the lies about “Returning home”, it makes you wonder: Who are the original inhabitants of this tower? Is anyone original? Or was Hamdo, Abelia, all of the current adults, was everyone kidnapped as well by a prior “King” and they have kept the status quo since? Additionally, where are they getting everyone from? Are they being kidnapped via the teleporter or are there some actual villages, legitimate natives, to this world? These are probably the most important questions on my mind right now. I think they will clear up a lot of the mystery Now and Then is currently setting up. All of this is to say, I hope Now and Then recognizes these questions and that we get answers to at least some of them before the show concludes in 9 episodes. 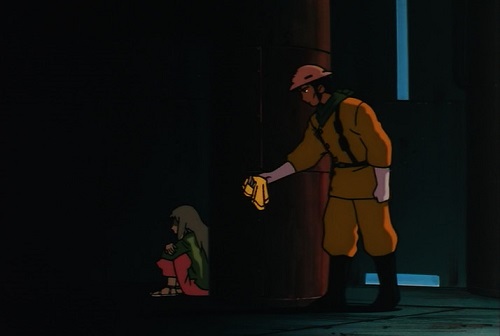 Finally I want to talk a bit about Shu this week. It’s almost stereotypical, almost tropey, how much Shu stands out in this world. How his kindness and refusal to adhere to their systems contrasts with Now and Then’s world. Like I said, its a trope. But like many tropes, that doesn’t mean it’s bad, only that we’ve seen it before. A well presented trope can be an effective story, it would not be a trope if it was not used often. And so far? I think Shu has been presented rather well. He’s just enough of an air-head that he doesn’t feel “Holier-than-you-art”, and his morals aren’t some grand ideal but rather what any normal, modern person would have. This effectively means that it isn’t Shu that’s standing out, but rather the world around him. And if you ask me, I think this is the best way to do this trope.

So with all that talked about, when everything is said and done, how was this episode of Now and Then, Here and There? Well I would go so far as to say its probably my favorite one yet. I really like these looks we are getting into the normal lives of the towerfolk. When Shu got captured I was expecting this to be a much more “adventurous” style story. One where we escape, hide around the tower, etc etc. So getting to experience what life is like in this world is a pleasant surprise, however bleak that life is. My hope is that now that Shu is established in this world, people know him etc, Now and Then can start to really explore the ideas it has otherwise just presented to us. With 9 episodes left, I think there’s plenty of time for that.

Previous Article Everything You Need To Know

The group’s greatest threat since Hendrickson’s betrayal is all 10 Commandments of the Seven Deadly Sins. We have seen enough to see that they are […]

In Aot, The Warhammer Titan (Zhan Chui noJu Ren Sentsui no Kyojin?) Is One of the Nine Titans. He is a titan with a superior […]

Now and Then, Here and There – 12 [This Bloody Earth]- Throwback Thursday

Welcome everyone, to the penultimate episode of Now and Then, Here and There! This week sees… well, it sees a lot. Bullets fly, people die […]