Eighty Six has returned everyone! After 3 months everyone’s favorite genocide simulation has come back to finish what it started! I’d say I hope all of you went and rewatched some old episodes for a bit of a refresher, but doing that myself just reminded me how disappointing this season really was. Still, it’s time to bury the hatchet and see if Eighty Six can end on a high note. So let’s jump into it!

First up, let’s talk about just how good this episode looked. Like seriously, say what you want about the narrative, the Eighty Six team used those 3 months well. This episode looked gorgeous. From the editing to the coloring and animation, it’s like they saved all of their efforts since production started for this. Take Shin’s opening flashback for instance! I absolutely loved the use of foreground silhouettes layered over scenes in the background. The flat black morphing and flowing around the screen, exploding into nothing at the sound of gunshot, the exaggerated mouth movements and use of negative space. And then we have stuff like the black bars constricting the scene tighter and tighter, Shin reaching out towards it. The story of how we got here may be mediocre but the visuals behind it are certainly not. And this is only the beginning of my visual praise!

After Shin’s big internal self-hate speech, you would think that Eighty Six would calm down a bit. Maybe go back to the rest of the plot. But no! Instead we are doubling down and milking the crap out of Shin’s mental state! And what better way to do that than to bring in Lena, without own set of admittedly very pretty imagery. I’m of course talking about the field of blue butterflies transition to red blood lilies. The way she moves and steps outside of the black bars, breaking the confines of the frame and Shin’s box of self-hatred. How those same black bars transition to white, transparent bars, showing how she brightens and opens up his world, etc. Even the rainbow explosions from the Morpho in the background. Eighty Six is just chock full of great imagery this week.

Now astute readers might notice that I have only talked about the visuals so far. That I have largely avoided the narrative. And you would be right! That reason is because I don’t think Eighty Six’s story this week is actually all that good. I actually want to say right here that I think most of the value in this week’s story comes from these visuals. They take what is an ultimately mediocre fellatio for the audience and elevate it into something that is almost… emotional. And as for why I think the narrative falls flat? Well let’s talk about that. 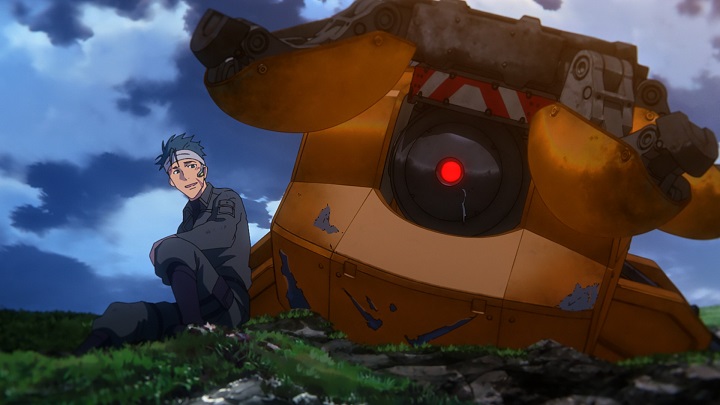 My big overarching feeling this week it feels like Eighty Six is afraid to commit. Like it doesn’t want to change the status quo and so is doing everything in its power to put that off. Take for instance the meeting between Lena and Shin: This was mostly fine! I really liked how her words, her appearance, the fact that she survived when everyone else had died and left Shin behind, affects Shin in this scene. That’s good stuff! But then Eighty Six backs out of having them actually meet, like its afraid of this big moment in a field of lowers. Now to be fair, it looks like we are going to get that next week, and I really hope we do. I don’t want this to end on a cliffhanger, I want this reaction, this meeting, this season. And I’m afraid Eighty Six won’t give that to me.

Speaking of a fear of commitment, we also need to talk about our surviving cast. Remember when I said 3 months ago that none of them were going to die? That you shouldn’t buy into the cliffhanger? Well look we were now. I get it, Eighty Six wanted this big moment of revelation for Shin, a nice happy ending for him. But this idea of ​​letting go of the past, of not letting it or them hold him down any longer, just to have his past survive to once again be used as a red-herring death in the future… It doesn’t work for me. I’m trying not to sound bloodthirsty here but these people got blown up and shot! How am I supposed to take this war, these battles, seriously in a war drama if I know anyone with a full name will survive? It doesn’t work for me.

And then of course we have Frederica. You didn’t think I would be able to go this entire post without ragging on Frederica again, did you? Especially not with her superior female counterpart, Lena, appearing again? Well I’ll try to keep it short. I had forgotten how grating I find her “uwu loli” voice. Add on to that having a 10 year old lecture Shin, a battle hardened veteran dealing with PTSD, about how living for himself and paving the way for others, using her mind reading power to figure out his feelings for Lena, and you have a perfect capstone to ruin what was an otherwise nice scene. I swear to god if you just removed Frederica from this story it would be twice as good.

Anyways lets cut this short, I need to save my rants for when I write the final review next week. All in all I actually think, for all my criticism, that this was a good way for Eighty Six to return. My issues with the show existed long before this episode. They were things baked into the very core of the season from the beginning. So this episode, this finale, was never going to resolve them. But what it did do was go all in on the emotional catharsis that viewers have been waiting 3 months for. While that may not change my mind about the show, I can only imagine the payoff of actual fans got from this episode. And I think that’s something worth recognizing. I might not like where Eighty Six is going. But it stuck to it’s guns and followed through to the end.

So lets at least recognize that before I go ham on it next week, eh?

Previous Article Everything You Need To Know

Next Article Everything You Need To Know

We talked with Baiyue & Maowa all about being a Vtuber! 1. What inspired you to become a Vtuber? Nothing special! I’ve never been particularly […]

Welcome back everyone, to another week of Isekai Ojisan! This week we have more subversive isekai humor, vtubers and… wait a second. Is that a […]

Platinum End Ending Explained: Everything You Need To Know

Tsugumi Obata and Takeshi Obata created Death Note’s highly anticipated series, Platinum End. This supernatural mystery has amazed viewers around the globe! Over the past […]